Watching TV in a dark room is one of the best ways to recreate the cinema experience – to draw all your attention to the screen and to eradicate distractions. If you’re watching a horror film then it will be that much scarier when you’re in a dark room and you don’t know what could be lurking under the sofa, and if you’re watching a romance with a loved one then it will be that much more romantic curling up under a blanket in the dark.

But there is a downside to this, and for many of us it does provide a bit of a concern when we worry if maybe watching TV in the dark is going to damage our eyesight. Parents across the world are constantly telling their children to turn on the light when they watch the TV, and sometimes it can feel like it causes you a headache. So that leaves two questions if you want to enjoy watching TV in darkness – is it actually bad for your eyes, and how can you go about preventing it from doing damage or at least limit the damage that it does do? We’ll answer both those questions here.

Is Watching TV in a Dark Room Bad for You? 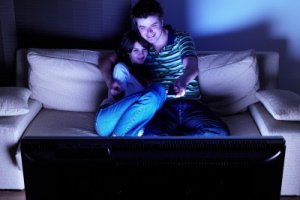 Let’s start by setting the record straight – watching TV in the dark can cause eyestrain, it can cause headaches… but it won’t cause you any permanent damage or worsen your eye sight. Let’s look at why.

When you watch television you are focusing on pixels of light that are caused by cathode ray tubes. This is just like looking at any other form of light and when you look at any color or detail normally this is light reflecting off of people – so it’s really no difference.

At least this isn’t any difference and isn’t any problem when you watch TV in a normal well-lit room. However when you watch it in the dark, then the problem is that that is the only lighting in the home. This then sets the lighting level for the whole room, and as what’s on the television changes, so the level of lighting changes. For that dark scene with them in the cupboard the room will be dark, but when the explosion goes off (not sure what film this is… ) it’s going to be very bright. So that then means that your eyes are forced to constantly adjust to different levels of lighting which makes the pupils dilate over and over again. This isn’t a bad thing, but what it does mean is that your eyes will be using more muscles than if you were to watch the television with the light on, and that then means that you are more likely to fatigue those muscles involved. This can then cause your eyes to hurt after a while and your head to hurt in some cases – but it won’t cause any other damage.

There are other problems involved with watching TV in a dark room too though. One of these is the fact that your eyes have difficulty adapting to the level of light. When light hits the cones and rods in your retina that then causes them to fire in a certain way. However if you see a very bright light and they haven’t fired for a while this can cause residual excitation – in other words the cone/rod continues to fire and you then see a bright patch of light in your field of vision even though you’ve looked away. So that explosion on the screen can leave you looking at the TV with a white line in the way, and this can then make it quite hard to focus on what’s going on – it will require more concentration and it will more likely cause headaches.

Finally you need to understand ‘contrast ratio’. This happens when you look at white lighting or bright colors on a black or dark backdrop. When you do this your eyes won’t know quite what to focus on – the dark or the bright and this can mean that they will again be forced to keep switching between the two and repeatedly dilate. This again causes fatigue and eyestrain and can tire you out – but again remember it won’t cause any permanent damage.

How to Lessen Eyestrain

The first way to avoid eyestrain is to lower the brightness on the television. This will mean that the lighting doesn’t affect the lighting in the room to the same effect and you are able to enjoy watching the screen at a constant level of lighting. At the same time the lower lighting will mean that your photoreceptors are less excited by sudden flashes and you won’t have glare in front of your eyes. Intuitively most of us would assume that brighter lighting would be better for seeing in the dark and thus cause less eyestrain, but in fact the opposite is true!

This will be unlikely to make a major difference to how you view TV in the dark, but it might make some difference. By lowering the contrast you bring the colors and brightnesses closer together and this way you will less have to worry about your eyes having to re-adjust.

Don’t Sit Too Close to the Screen

Our eyes when relaxed tend to look into ‘middle distance’. Focusing on something too close to us then can cause our eyes to have to work and over a long period of time it will cause them to start to fatigue. Likewise though having the television too far away can be a problem as your eyes need to strain to focus on distance too and particularly if there’s writing on the screen (though most people’s rooms are not big enough for this to be a problem). In other words to find the optimum viewing distance for your television, try letting your eyes just relax and see where they naturally focus. Now just put your television wherever that point is and you’ll not have to work to view it.

You’re dealing with one major light source and the problem is that that light source is flickering and glowing. Your eyes can just about cope with this but if you let glare get in the way as well then this gives you more to focus on and makes it more difficult. At the same time it can get in the way of things you are trying to focus on. So just make sure that if you’re going for the dark room effect that you avoid having any sources of light opposite the screen such as open windows. Draw some heavy curtains for instance.

Better than all this though is just to have a low level of lighting rather than having completely no lighting at all. To achieve this set up some smaller little lamps around the room that create a homely glow rather than a bright glare and put these on instead of the big light. It will help to create a more constant level of lighting but at the same time it will still create a slightly cinema-like feel.