The things that can have a positive impact on our health are many and varied, and often it can be surprising to learn that something that doesn’t intuitively seem to have anything to do with our health can actually have a big impact on it one way or another. For instance take jellyfish – you likely have no reason to have thought of jellyfish as a great source of nutrients, or as the key to unlocking secrets of our own health – but in fact they are both. Here we will look how the humble jellyfish can benefit your health and how they might one day help us to better understand the human body.

Jellyfish are remarkable creatures. While you and I are ‘mostly water’ jellyfish take this to the extreme and are only 5% solid matter and 95% water. They are invertebrates meaning they lack a spine and so they don’t swim or walk but rather just ‘drift’ with the currents and go wherever they may take them. 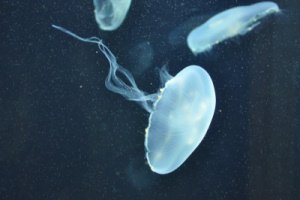 There are a vast number of jelly fish species and these come in a range of shapes and sizes – sometimes with tentacles up to 100 feet long. Some will drift in shallow coastal waters but others prefer depths of up to 12,000 feet. They live three to six months and they come in a variety of colors.

And if you want an amazing jellyfish fact how about this – the Turritopsis Nutricula Jellyfish is a species of jellyfish that never dies. Yes this jellyfish is biologically immortal meaning that if it’s never in an accident or caught by predators then it won’t die. This is because it can revert itself back to its neonatal state as a newly born ‘polyp’ and thereby rejuvenate all of its cells.

Eating dried jellyfish is highly nutritious and they contain a lot of good substances. Jellyfish are one of Asia’s most popular foods and are served dried and chopped into small pieces and boiled to add a crunchy texture and remove salt. Their health benefits are that they contain a lot of calcium binding proteins which improve memory and help to fight age related cognitive decline. In one study 56 participants were put on a jellyfish diet and it was found that 57% of them experienced memory improvements. Normally our brain produces calcium binding proteins of its own, but as we get older these reduce in number. This is a problem as the proteins are used in order to regulate the amount of calcium in the brain cells and this can then slow down various brain functions.

At the same time dried jellyfish contain collagen which may be helpful for the treatment of arthritis and visible signs of aging once again. All this suggests that while you’re not going to become immortal like the Jellyfish, you will nevertheless gain some youthfulness as a result of eating them. Jellyfish are also harvested for their collagen and this can be used in many beauty products.

Most fundamentally though, the jellyfish is mostly protein and water meaning that it is a very lean source of amino acids with very few carbohydrates or fats making them the perfect diet food.

Jellyfish sting as a natural response to touch and this is their primary defense mechanism against predators. Some of these stings are deadly – such as stings from the box jellyfish but in many cases it is perfectly safe to swim with jellyfish. Some stings are not strong enough to breach the skin at all while others are barely noticeable. As jellyfish are so calming and beautiful many people find it fascinating and therapeutic to swim with them. If you enjoy the thought of swimming with jellyfish then the best way to do so is to head to Clear Lake on the island of Eli Malk in Palau. Here you will encounter the ‘golden pool’ filled with countless ‘golden jellyfish’ which have lived there without evolving for millions of years. Because the lake is cut off and so high in nutrients, the jellyfish have lost their sting and that makes them completely harmless to swim with. Meanwhile more and more people are taking an interest in keeping moon jellyfish as pets.

The real benefits of jellyfish to mankind however lie in their unique genetics. The luminescence that they produce for instance (the green fluorescent protein gene in crystal jellyfish specifically is responsible) is often used as a ‘biomarker’ or ‘biotag’ to allow scientists to identify the activation of genes. They have been used to create glowing cats, mice and other animals and this then indicates that the other changes they have made to those animals’ genetics are also working. Luminescent cats most recently have been used to research a potential cure to AIDS. This has additionally allowed scientists to see inside living cells and this has helped to revolutionize medicine and our understanding of our cells. And finally the paralyzing aspects of jellyfish venom it is hoped may help us to unlock the keys to the human cardiovascular system.