Salt therapy, also known as halotherapy or speleotherapy, is an alternative form of medicine that is used to treat a range of respiratory conditions. While it might sound very unusual, if you’ve ever been to the beach and felt as though it made you feel healthier and improved your breathing, then you will probably be sympathetic to the idea of salt therapy. Here we will look at this seemingly radical form of asthma treatment in more detail and ask the crucial question: does it work?

What Is Salt Therapy? 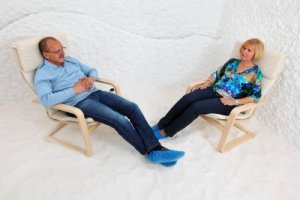 The central idea behind salt therapy is that salt is good for your health and for your breathing. Going to the beach is thought to help people with breathing difficulties partly due to the salt content in the air, and so salt therapy aims to recreate these conditions in a more concentrated way – subjected clients to conditions where there is a high concentration of salt in the air in order to try and help improve breathing.

To do this the treatments create what is known as a ‘salt cave’ which is a man-made room that has salt covered walls and floors in an attempt to mimic the experience of being in a real naturally occurring salt cave. This creates a controlled ‘microclimate’ where other factors such as the temperatures and moisture levels. This uses what is known as ‘halogenerators’ designed to help regulate salt content in the air.

How Does Salt Therapy Work?

While we have all been able to appreciate the feeling of breathing in a big gulp of sea air, most of us don’t really realise what it is that’s happening or how this helps improve our health. So here’s the idea behind the claims…

Essentially the idea behind salt therapy is that it allows negatively ionized salt particles to enter the respiratory system and to reach all the way into the aveoli. From here studies suggest that the saline diffused air particles will be able to reduce inflammation which can lead to asthma attacks, and absorb substances from the mucosal lining which can otherwise make breathing more difficult. Furthermore, saline substances are antibacterial, and so this can have other positive effects on the health of clients by helping prevent bacteria and viruses from causing problems.

As a result many patients report feeling that their respiratory system feels ‘cleaner’ and that they are better able to breathe normally.

The idea behind salt treatment is sound and it is likely that it will have at least short term benefits. At the same time some clinical trials have found there to be significant benefits of the use of salt treatment. In one study 57% of participants found they used less asthma medication, while in another average annual sick leave was reduced in patients by 11 days. Studies have demonstrated that results can last up to twelve months if the treatment has been used frequently.

There are however downsides to salt treatment. The first is that it is by no means a miracle cure and ultimately visiting just once or twice won’t have hugely profound effects on your long term asthma problems. This is unfortunate considering how costly salt treatment can be which makes it somewhat restrictive. That said, if you are particularly struggling with your asthma or breathing problems, then a visit to a salt cave will still do you good and as its therapeutic and relaxing you probably won’t begrudge it either.

The effects of salt therapy are mainly cleansing, and it won’t take long for these effects to be undone unless you make regular visits. At the same time a perhaps bigger concern is the fact that there is no regulation for salt treatment. This is something that many entrepreneurs have latched on to and tried to recreate with mixed results – for instance in order to enter the aveoli, salt particles need to be around 0.1-2.5 micrometers, and if they are larger they won’t have the same benefits. If you do decide to give salt therapy a go, then make sure that you research the place you are going and the company that run it thoroughly first.

Your Own Salt Therapy

Of course the other option is to move by the sea to escape pollutants and get more salt in your air naturally. It won’t be quite as direct, but this ‘continuous salt treatment’ will mean that you’re breathing in healthy and clean air more often than not and that your lungs never regress as a result.