Using insect repellants is a handy way to avoid one of the biggest pitfalls of going on holiday – coming back with big painful bites. At the same time, in some cases if you are going somewhere where malaria is prevalent, then using bug sprays can be a very important way to avoid getting ill (along with the use of immunizations).

It’s possible to get too much of a good thing, and if you are not careful bug spray can actually cause poisoning – quite the opposite of the intended effect. This is caused through breathing or swallowing bug spray which can occur if you spray too much in your vicinity and then move around where it is still hanging in the air.

Why Bug Spray Can Cause Poisoning

The reason that bug spray can cause poisoning is that it contains a substance called ‘DEET’ (N,N-diethyl-m-toluamide). This prevents mosquito born diseases but is not fit for human consumption. Meanwhile other less effective versions contain pyrethrins. This is a milder substance that is less effective at keeping mosquitoes at bay, but which is less likely to cause illness as a result. However it can still cause breathing difficulties if inhaled. 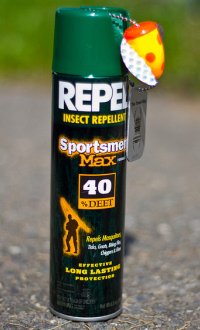 The symptoms of bug spray poisoning include:

At the same time as causing poisoning, DEET can also sometimes have adverse reactions against the skin. This might cause slight amounts of redness where the bug spray is administered, and if it is breathed in then it might cause burning sensations in the mouth and nostrils. This is not normally serious and should subside after a short time.

While a skin reaction may not be severe, poisoning can be very serious and it is important to treat this as early as possible. It is important not to give the patient water or milk if they are having symptoms that make it hard to swallow. Likewise you should not instruct the patient to try and vomit if they have ingested the substance unless you have been expressly instructed to do so by medical experts. Make sure that you call the emergency services as early as possible to avoid seizures which could cause permanent brain damage or even death. Try to provide the emergency services with the patient’s age, weight and condition, the precise name of the product consumed, time it was consumed or inhaled and the rough amount. In the meantime you can try to use activated charcoal to absorb the substance.

Upon admission to the emergency room the patient will receive fluids via intravenous injection, medication, activated charcoal, oxygen, a breathing tube/NG tube, bronchoscopy (a camera used in the throat to observe burns to the airways and lungs) and irrigation. If the patient is seen early then the prognosis is usually good unless very large amounts were consumed or asphyxiation occurs.

To avoid bug spray poisoning it is important to take some basic proportions. Make sure that you keep bug spray out of reach of children, and to use small amounts when applying. Avoid spraying bug spray into the air and instead spray small amounts onto the skin (from a short distance). For very young children avoid using bug spray containing DEET. Having some activated charcoal around the house can also be a good precaution to take.