Fidgeting is something that has a bit of a bad reputation, and while it is essentially harmless it nevertheless has several unwanted side effects that make it a problem and unpopular.

First and foremost fidgeting makes you look nervous, or even in some cases rude. Second of all it puts other people on edge, and when they see you picking things up or biting your nails it distracts them from what they’re doing and makes them wonder what you’re about to do next. Thirdly if you’re absent-mindedly fiddling with things or picking at things then you never know what kind of damage you can cause – breaking something or even hurting yourself when fidgeting. It’s simply not good body language and if you do it in important social situations – such as dates or interviews – then it can cost you that social interaction.

In other words for the sake of others, as well as for your own reputation, it is important to learn how to stop fidgeting and to keep your hands still. Often this need to fidget comes from a nervous energy however, and it can become a habit over time that’s hard to break. Here then we will look at some ways you can stop yourself fidgeting and bring your hands and feet back under your control. 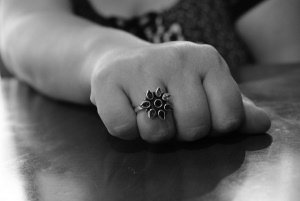 They say that the devil makes work for idle thumbs and if you find ways to keep your hands busy in a way that doesn’t look like fidgeting then this can be a good way to stop yourself. For instance put your hand against your leg under the table or wherever else no one can see it, and then just lightly tap your leg. Alternatively if you don’t need to look like you’re listening, then take out your phone and send some texts – it’s a great way to keep your hands busy that’s more socially acceptable than fidgeting.

Sometimes one of the simplest ways to stop yourself from fidgeting is to cross your arms, or to link your hands together, or even just make fists. This will mean your fingers aren’t free to do anything. Alternatively try holding things like a bag and this will stop you from fidgeting too.

Often the reason we fidget is that we have restless energy, and often that energy comes from a pent up feeling that we should be, or want to be, doing something else (which is partly why it is perceived as so rude). You’ll find your mind is often racing when you’re fidgeting and that you feel like you have other places you need to be. However for whatever reason you are currently in this situation and currently there is no way to politely get out of it. Instead of worrying about it then, accept it for what it is and just lean back and enjoy yourself.

Another reason people often fidget is because they’re bored and in this case it can happen unconsciously. Try to engage then in what is happening around you and try to find what you’re being told interesting – all information has some value and if you can find an angle that makes it interesting to you then you can start paying more attention and stop fidgeting. Alternatively you can just try distracting your mind in other ways – if you’re bored for instance then try counting tiles on the roof or thinking of something you’re more interested in.

Nervous energy can come from several places. It might for instance be a result of your having too much energy in general, which can be a result of a particularly sedentary day. Alternatively it might be a result of your being in pain in which case the fidgeting acts as a distraction. In other cases it can actually be because you’re too tired and in this case tiredness can prevent you from focusing on what’s going on and this in turn can cause your mind to wander.

So in other words fidgeting can be a symptom of something else, and if you address this issue you can start to feel better. So make sure you get lots of exercise and fresh air during the day, good night’s sleep, and that you address any form of pain you might be suffering from. Reduce caffeine and sugar intake.

If you keep fidgeting just out of habit then you need to just stop yourself doing it each time. Break the cycle each time and you’ll eventually break the habit (they say that it takes 30 days to fully break a habit). An ideal way to do this is to wear an elastic band on your wrist, and to just ping it back each time you catch yourself fidgeting. It’s an effective sharp punishment to cease an unwanted behavior and you’ll come to associate fidgeting with the snap. However it can become hard sometimes to notice yourself fidgeting, so if you inform others of your plight to stop then they can join in by ‘snapping’ you out of it (literally) when they catch you.