Many people are confused about the differences between asthma and allergies, and with reason, because the two conditions are often related. Millions of people in the U.S. suffer from asthma, and in about half of the cases, they are either also allergic to substances in their environments, or their asthma attacks can be triggered by such substances.

The primary difference between an allergy attack and an asthma attack is the location in the body of the reaction. Allergens – substances such as pollen, dust, and mold that are not harmful in themselves but result in a reaction in those allergic to them – often trigger this response in the upper respiratory system. The reaction happens because your body produces IgE (immunoglobulin E) antibodies, which in turn cause the body to produce chemicals like leukotrienes and histamines. These chemicals trigger the allergic reaction itself, which is commonly experienced as sneezing, congestion, itching, watery eyes, hives, headaches, or irritated skin.

Asthma is a more serious condition. It can be triggered by the same IgE antibodies, but the reaction is located in the lungs and upper bronchial passages. They may become inflamed and close down, causing coughing or wheezing. During an asthma attack the bands of muscle surrounding your airways experience bronchiospasm, which causes them to narrow. The membranes that line these airways become inflamed, or swollen, and produce more mucus, further limiting the flow of air. This may be experienced as coughing and wheezing, as mentioned above, but can also cause chest pains, shortness of breath, and being unable to breathe. Asthma affects more than 25 million people around the world, and is the most common chronic disease found among children. 5,000 people per year die of asthma. 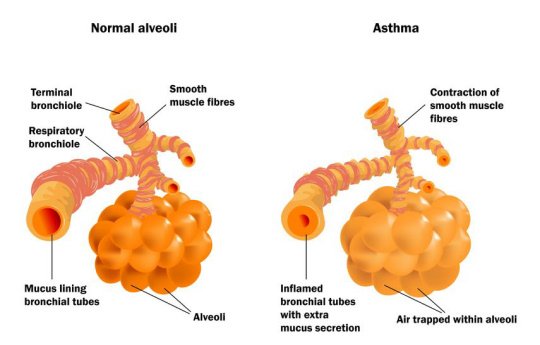 The different types of asthma

Why asthma and allergies are related

Although the location and the severity of the symptoms differ between allergy attacks and asthma attacks, both can be triggered by the same things. Approximately 80% of asthma in children and 50% in adults is considered to be related to allergies. Both allergies and allergic asthma tend to be seasonal, in that attacks occur more often during the Spring or Summer, when allergens like pollen fill the air, or during the Winter, when windows are shut and people are more exposed to indoor concentrations of dust, pet dander, etc. They are also related because allergies – if left untreated – can over time develop into asthma.

What can I do about my allergies or asthma?

First, see your doctor. Most of the symptoms – whether the stuffy nose and watery eyes of allergies or the coughing and difficulty in breathing of asthma – can be controlled by medication. Allergies can be treated with antihistamines, and asthma can be treated with bronchodialators, leukotriene modifiers, and anti-inflammatories. An allergist can perform tests to determine what exactly you’re allergic to, and give advice on how to eliminate these substances from your home or workplace. Both allergies and asthma can be unpleasant, but both can be controlled, and neither needs to keep you from enjoying your life.