Testosterone is the ‘male hormone’ which is produced naturally by the body in men, and which is largely responsible for many of the differences between men and women. To this end it causes men to build muscle, to burn fat, to develop lower pitched voices and to grow more hair, and while the latter two points might not be of particular interest to anyone, the first two of course are – and particularly to bodybuilders and athletes and anyone looking to get into better shape.

Testosterone is also the main reason that men are thought of as being more driven by sex and ‘hornier’ than women, and is crucial in order to encourage a healthy sex drive. This makes it handy for men who struggle to get erect or who have lost their libido. Finally testosterone is also correlated with high drive and mental energy and is thought to help prevent depression.

Do You Need More Testosterone? 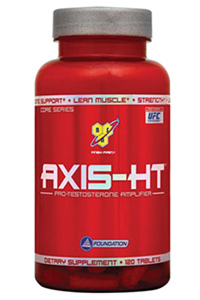 In short then, if you are a powerful looking jock with rippling muscle, a deep laugh, lots of confidence and drive and a hankering for lots of sex you probably have high ‘T’. If you have a beer belly, a low libido, lack of motivation to do anything and no muscle mass to speak of… well then you probably have quite low testosterone.

There are also a few other symptoms of high T as well. For instance if you have defined cheek bones and a protruding brow this is a sign of high testosterone, as is a more rounded and less flat hairline (so that it goes back at the sides). Male pattern baldness is also a sign of high testosterone, but also highly sensitive hair follicles. Meanwhile being generally hairy and having a deep voice are also signs, as are getting frequent and random erections and producing large quantities of sperm.

One of the indicators of testosterone that receives a lot of attention is the discrepancy in sizes between your ring finger and index finger. If the index finger is longer than the ring finger then this demonstrates that you were subjected to large amounts of testosterone in the womb (though this doesn’t necessarily correlate with high testosterone now), and interestingly studies have found that while most women have shorter ring fingers, lesbians on average have a ratio that show they were exposed to more testosterone during their development.

For all these reasons testosterone supplements are rather popular among bodybuilders, but also among men at large who want to improve their general drive and libido. The idea of testosterone supplements is of course to boost testosterone, and to this end they should improve drive and confidence, libido, erections, muscle mass, weight loss and overall ‘manliness’. However while that’s the general idea, they don’t always quite live up to the hype.

Part of the problem is that there is an upper limit to how much testosterone your testes are capable of producing, full stop. So unless you wanted to use prescription testosterone boosters, or illegal steroids; or unless you had some kind of deficiency resulting in low T production; you would be unlikely to see effects that were worth the money that you pay for a small tub of pills.

And it’s also worth bearing in mind that too much testosterone would also be a bad thing for you, and this is partly why you don’t want to get too much of it. Testosterone for instance causes acne as well as hair loss, while at the same time it can also result in short tempers. More concerning, if you were to take steroids or other powerful T boosters, then this would result in unnaturally high levels of testosterone in your blood, which would cause the body to attempt to compensate – by reducing the size of the testes and/or by increasing oestrogen which can lead to more mood swings as well as the development of male breasts.

In short then, unless you are diagnosed by your doctor as having unnaturally low testosterone, you would be better off avoiding testosterone supplements which would either have no effect or cause unwanted side effects.

There are however other more natural ways to increase testosterone. One of these is through your diet – and increasing your intake of zinc and magnesium, and eating more red meat will help you to get more of the hormone. Meanwhile you should avoid beer which can actually increase production of oestrogen resulting in the opposite effects. In terms of lifestyle, exercise or sports, as well as sex itself, can all help increase your natural levels of testosterone; and it’s very important to get lots of healthy sleep which puts the body into an ‘anabolic’ repair state. You should also aim to try and improve your mood as depression can sap your testosterone and cause the production of cortisol which has many of the opposite effects.

So play sports, have sex, eat meat and sleep for a long time… certainly a more fun way to increased testosterone than spending $60 a pop on a month’s worth of tablets… And if you do have diagnosed low testosterone, then you should consult your doctor.