If you’ve been watching the Olympics like everyone else, then there’s a very real chance that you’ll have been somewhat inspired by Usain Bolt. A combination of his charisma and confidence, along with his trademark pose and of course his incredible speed has made sprinting into a very attractive sport.

As such you might have become interested in improving your own running speed and seeing if you have any natural talent in that area. At the same time this is a brilliant pursuit for improving your body shape and it’s an excellent skill to have for any number of sports and for any crisis. 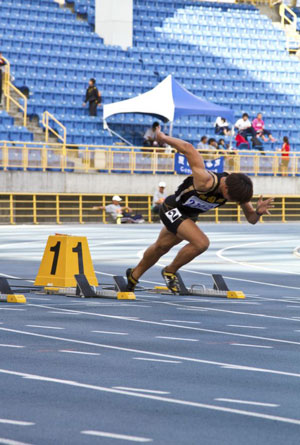 There are various ways you can train to improve your speed, and these include simply practicing running, as well as running under all kinds of difficult situations. What can also be very effective though is to use some of the following speed drills to work the required muscles in a short burst. Here are some examples of great speed drills.

Marching A’s: Marching A’s are a great warm up for running and involve starting out marching with your arms swinging and knees coming up high, before eventually evolving this into a kind of skipping march so that you are skipping with your knees coming up high. Here you are going to focus as well on the driving force you put into the ground behind you in order to propel you forward. Do this before the following drills for a few yards and you will help to avoid injury.

Prone Sprints: Prone sprints means leaning as far forward as you can while running in order to add to the force of gravity pulling you forward. Ideally you will run in such a way that you are constantly about to ‘fall’ forward but throwing your feet out in front of you to stop yourself each time which is the most highly energy efficient technique.

Of course it’s hard to force yourself to run more prone as it feels more dangerous and like you’re going to fall flat on your face. So what you are going to do instead is to lie face down on your stomach and then push yourself up with your hands as you begin to run. Start running before you are fully upright and try to maintain as much of a diagonal position as possible through the drill.

Prowler Sprints: Here you need prowler poles which are basically attached to a sled type thing with as many weights plates over the top as you want to increase the difficulty. Now basically you sprint while holding the poles and pushing the load which can greatly improve power in your legs (and will make you great at the supermarket dash too).

Uphill Sprints: Uphill sprints are what they sound like – sprinting up a steep incline. This develops the legs and encourages powerful arm strides and downward force. At the same time this is a useful way to train in the build-up to an event because it doesn’t let you move at full speed and thereby can prevent a hamstring tear from occurring right when you don’t need it.

Dumbbell Runners: While standing on the spot you will hold two dumbbells, one in each hand, and then practice gradually swinging one back as far as you can like a tricep kick back, while at the same time bringing the other one up in a hammer curl. You will then gradually swap sides so that you are effectively running with your upper body in slow motion while adding resistance. This will increase the power needed in your arms in order to swing and drive you forward when you are sprinting.

Overspeed Training: Overspeed training is any sprinting where you are running faster than you could normally run. For instance then you might run downhill at top speed, or even run as fast as you can while being towed just above your top sprinting speed by a car (of course this is highly dangerous and only really an advanced technique). The idea here is that your body is forced to adapt to the new speed and thus you ‘teach’ yourself the technique needed to maintain higher pace.

High Knees: Pounding your legs up and down as high as possible is something you can practice on the spot or while moving forward and that will increase your explosive power (your fast twitch muscle fibers) while at the same time developing your ability to rapidly create downward force – both of which are very important for your sprinting speed.