When it comes to training fads and new ways of getting into shape, they don’t come much more popular at the moment than ‘HIIT’. HIIT stands for ‘High Intensity Interval Training’ and has been around for a long time (which is always a good sign) even though it is only just starting to be marketed as a great way to build muscle and burn fat in no time at all. So is it any use? Or is this just one more craze fuelled by aggressive marketing? 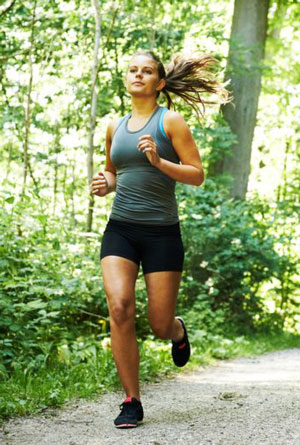 The idea behind any form of high intensity training is that a workout doesn’t need to be an hour long to be effective; as long as you put in the same amount of effort it can be however quick you want it to be. If you think about the way most people work out then it normally involves a few exercises lasting little more than a few minutes, followed by a much longer period of rest. Over 50% of your time in the gym is probably spent sitting down not doing anything, and the time you actually do spend working out you probably aren’t giving it 100%.

Instead then, imagine a workout where you put in 110% and reduce your rest periods to a minute or less. Well that’s ‘HIT’ and it’s what athletes and bodybuilders have been doing for years. In fact, Joe Weider’s ‘Training Principles’ in the golden age of bodybuilding (throughout the 70s) looked at the way successful bodybuilders trained and found that most of them would use any technique under the sun to keep going and to shorten their rest periods. That meant getting a friend to spot them when they couldn’t do any more repetitions (assisted reps), it meant dropping down a weight without pausing in between (drop sets), it meant doing just part of the movement when they could no longer go through the whole range of movement (partial reps and burns) and it meant alternating with another exercise instead of resting between sets (super setting). Bodybuilders would use these techniques for an hour or longer on a single muscle group each session and thus they would grow huge – but for anyone looking to fit their workouts into a busy schedule this could also be used in another way in order to reduce the amount of workout time. So in that time you could get a better workout than many people do in a whole two hours… This isn’t a fad – it’s simple fact and it’s been around for ages. How good a workout is has nothing to do with how long it took…

So that’s the idea behind high intensity – and it was only recently that marketers recognized how they could market this to busy professionals and Mums who might want to get in shape training just a twenty minutes a few times a week instead of hours. This caught on big time but (unfortunately) most people aren’t interested in building Arnie-like muscles, so it had to be tweaked slightly to appeal to those looking to lose weight.

Interval training is a concept used by athletes and others to improve their ability in CV tasks such as rowing or running. The idea is that you don’t just run constantly at a light jog, but instead intersperse this with periods of running quickly and training at a much higher level. So you might then try running fast for 2-3 minutes until you’re completely out of breath, then jogging likely for 5-10 minutes to recover before going fast again. You repeat this over and over until your session is up.

Overall then this kind of training will mean that you’re putting in much more effort in a much shorter period of time and that then means you can reduce the amount of time you train for. In twenty minutes you can have burned almost as many calories as you might by running for forty minutes or longer, and again this is something that is very useful for those who struggle to fit a workout into their schedule.

At the same time though you can also benefit from this kind of training in other ways. Interval training for example can help you to benefit from anaerobic exercise. Anaerobic exercise means exercise where you aren’t using oxygen to get energy and when you run fast you reach this point because the aerobic energy system won’t be quick enough to supply your body with the fuel it needs. You can only sustain anaerobic exertion for a few minutes at a time though, which is why you have to switch back to aerobic CV afterward to recover. At this point though you will have used up all the energy available to you that’s stored in your blood and your muscles and that will mean your body will be forced to burn more fat as you run resulting in better results.

Furthermore, running fast or sprinting is one of the few ways we can encourage our body to produce growth hormone, which has the effect of burning fat and building muscle. When you train with HIIT then you will reap the benefits even after you have finished exercising.

What You Need to Know…

Most of these HIIT sessions and classes you see advertised at your gym will combine both these elements to create a circuit-type workout that will involve running around a set course and then doing various resistance exercises such as press-ups, squats, jumping jacks etc. at each one. The crucial ingredient in all of them though is the fact that the intensity doesn’t let up meaning that you will be able to get a much more useful workout in a much shorter space of time.

So is this a good option for your own training goals? Well if you’re looking to just tone up and burn calories then HIIT classes certainly are a good way for you to do this in a very structured and convenient manner (as long as you belong to a gym or have a DVD to help). One thing to bear in mind in that case is that you can still benefit more from doing more. While a twenty minute HIIT workout three times a week might be a good way to improve your fitness and your physique then, doing two in a row each time will still be even better. Be wary of any session that claims to provide a full workout in under ten minutes – that’s just a little bit too bite sized to really provide that much benefit.

On the other hand, most of these classes won’t be suitable for those looking to build muscle and gain a lot of mass. While bodybuilders use HIT, these classes are designed with a lot more CV in mind and only a small amount of light resistance work (those using the kettlebells are a little better). If you really want to build muscle and get into shape you need to lift heavier weights and stick to one body part. You’ll have to go it alone then, but you can still adapt Weider’s training principles to make your sessions more intense and you can use this to see much more impressive results or just to make your workout that much quicker.