The most common excuse people give for not working out regularly is that they don’t have the time. In reality the cause tends to be more a mixture of time, motivation and energy; but either way the fact remains that they just can’t bring themselves to do a whole forty minutes of exercise after a long day at work.

But what if you weren’t to do the whole session at once? What if you did four ten minute workouts instead as you went about your day? That way you could do a quick workout before work, one during lunch, one before you went home and one in the evening… and this could have a number of advantages. 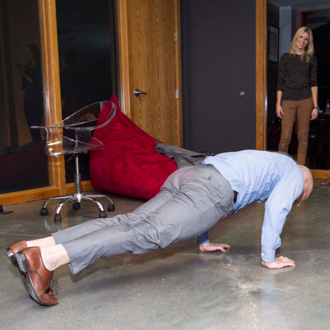 Psychologically these workouts would be a lot less stressful because you wouldn’t have to bear a whole hour’s worth of strenuous exertion at once (it’s much easier to talk yourself into just ten minutes of work).

Likewise you may find that ten minutes are much easier to slot in around a busy schedule compared with whole hour sessions. And because you won’t get yourself as sweaty and exhausted you wouldn’t have to shower, change or slob out immediately afterwards.

But the question is… would it work? Would it actually result in the same improvements to your health and fitness? Or is there a good reason that we normally do our workouts all in one go?

Well to start with the good news, you certainly would still get a lot of benefit from training this way, and you’d actually probably get some specific benefits from this type of training too.

Studies show that with regards to general fitness and weight loss, doing mini workouts throughout the day can actually be almost as beneficial as doing a single workout of that total length. In fact if burning calories is the aim, it may even be more beneficial as it ensures that your metabolism remains heightened throughout the day. This could also help to keep you more mentally alert.

In another study it was found that exercising in shorter bursts this way could help to prevent participants from then eating too much or completely vegetating in order to recover.

Another benefit of taking multiple shorter runs for instance is that it will place less stress on your body thus reducing the likelihood of injury or overtraining.

For muscle building things get a little more complicated as a certain amount of fatigue is required in order to stimulate muscle growth. Muscle growth occurs as a result of microtears to your muscle fibres which then subsequently get repaired by your body. The repair process causes those muscle fibres to grow back with an amount of ‘scar tissue’ (effectively) making them thicker and stronger than they would have been previously.

So can you accomplish this type of fatigue in a ten minute workout? Certainly – it just requires you to be much more intense with the way you’re training and to focus on just a single muscle group for each of those sessions.

For instance, you could do three sets of pull-ups supersetted with bicep curls (meaning you alternate between them rather than resting), rest for one minute and then do two more sets of hammer curls with a heavy weight. That short workout in the space of ten minutes would likely create more fatigue and microtears than the majority of exercises you may have been using previously.

Working out for a full hour may still have the edge for other reasons though when it comes to muscle building. Not only will using more muscles in a single go trigger the release of more growth hormone, but prolonged work on the same muscle groups can also help to encourage more growth through mechanisms such as occlusion (where more blood and minerals get ‘trapped’ in the muscle being trained). Moreover, there is a lot of information and existing evidence available when it comes to people working out using a single hour-long session, whereas we know significantly less about how well working out in such short intervals might work.

Put it this way though – we certainly know that working out throughout the day in this method will work better than not working out at all… and likewise if you’re currently doing three forty minute workouts, this might be a way to train on two extra days which can only be a good thing. Recently a lot of prior training knowledge has been turned on its head. It’s at least worth a shot!