Exercising first thing in the morning is a goal that many of us share. The idea here is that by working out in the earlier hours, we will be able to get the day off to a ‘good start’ and at the same time avoid letting other things get in the way that could interrupt our good intentions.

Only there’s just one problem: waking up early enough to work out before the morning commute is hard. And waking up with enough energy and motivation to exercise is harder still. 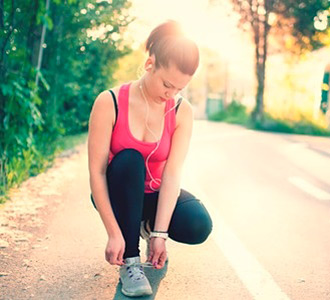 So the question is: how do you go about convincing yourself to work out in those early hours when you don’t have any energy or motivation and all you want to do is hit ‘snooze’?

‘Prep and pick-up’ is a popular concept in self-help and self-development and essentially refers to the process of setting yourself up while you feel motivated and energetic so that there’s less to do when you’re not.

A great example of this is to set yourself up for a workout the night before. You can do that by laying out your gym kit (and your exercise equipment if you’ll be training at home) and preparing anything else necessary the night before so that it will be ready for you when you wake up the next day and all you have to do is slip them on and get started.

Give it Ten Minutes

While working out in the morning is a good idea in principle, working out too soon after you wake up is not a good idea at all. That’s because your spine will be more supple and flexible after a long night’s sleep, meaning that you can easily hurt yourself if you engage in strenuous exercise.

The solution is to be up and around for at least ten minutes first and to warm up for a while before you begin any real heavy lifting.

If you’re tired and achy from a night’s sleep then the thought of getting up and right away doing two hours’ worth of training is going to be incredibly painful and off-putting. That’s why it’s better to aim for ‘little and often’ which will let you form a new habit that’s easier to stick to. This will also be less hard on your body if you’re prone to pulled muscles and other problems.

Training twenty minutes every morning is just as helpful as training two hours three times a week – and probably better for you.

Ideally the best thing to do is to prevent yourself from feeling tired in the morning at all. That’s easier said than done obviously, but there are a few things you can do to increase your chances of waking up with the required energy.

The first is to try waking yourself up during REM sleep at which point you will be sleeping the lightest. To do this you should simply try to wake up after a number divisible by 90 – as you start a new sleep cycle after every 90 minutes (account for the 20 minutes you go take to get to sleep). There are apps out there that can help you to measure which stage of sleep you’re in too and these will wake you up when you are in lighter stages at times close to when you need to be up and about.

Also useful is to make sure you drink adequate amounts of water prior to going to sleep. Often the reason we feel groggy in the morning is not that we are overtired, but that we are dehydrated. Drink a pint of water before bed and this might help.

Lastly, make sure you are sleeping in a darkened room with no phones or LEDs breaking that darkness and as little ambient noise as possible. Get to bed and wake up at the same times every day and avoid eating too much or drinking caffeine right before bed.