If you’ve been finding that alcohol is a little too inconvenient for you then… who are you? Seriously, this is a problem some people have? Weird as it may sound, just as there are protein shakes for bodybuilders it seems we now have powdered alcohol for… teenagers? I guess?

What Is Powdered Alcohol? 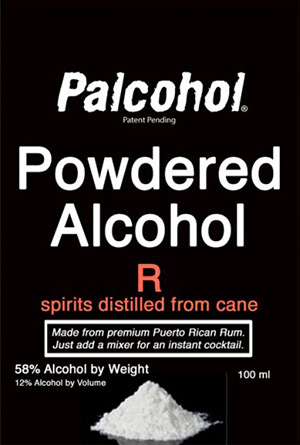 It’s called ‘Palcohol’ and while it’s not yet commercially available there’s a good chance it will be in stores near you later this year. The premise is simple: alcohol available in powered form which you can then mix with water or any other drink you like in order to make it alcoholic. It will come in four varieties: rum, vodka and four different cocktails. In theory this would then allow you to carry a little sachet of alcohol in your pocket to a party and not have to lug heavy bottles around with you. Presumably it might also be more affordable which might open it up to a wider audience. Yup, those definitely sound like good and healthy things…

This is big news right now as Palcohol recently received federal approval resulting in a big demand for the substance… or so everyone thought. It turned out that The Alcohol Tobacco Tax and Trade Bureau ended up rescinding the decision, but Palcohol’s parent company believe that the problem was related to the quantities provided in each packet and that they will have more success if they re-apply. And if you think it sounds too far-fetched, then bear in mind that similar products already exist in a number of other countries including Germany and Japan.

How Does it Work?

The original patent for powdered alcohol is available online meaning that anyone can see precisely how it works (this is a good thing). First a carbohydrate base is dehydrated down to a moisture content under 1%. This will be something that’s water soluble and sweat and provide the basic substance and taste of the Palcohol. From there the powder will absorb the ethanol to the required degree and if you get the proportions correct you’ll have your very own alcoholic powder. The powder needs to remain in a sealed container to prevent the ethanol vapours from seeping out and in most cases the powder is 58% alcohol. That’s high, but you will be diluting it more when you mix the substance with water taking it down to 12% (something close to a wine). Another thing to bear in mind is that this substance is highly flammable. Each pouch contains roughly 80 calories.

Theoretically powdered alcohol is no more or less unhealthy than any other form of alcohol. You could argue that the added calories are a bad thing, but then you’d get more calories from the sugars in most drinks anyway. One downside is that you won’t get the various health benefits that certain drinks provide – such as the resveratrol you get from red wine – but then no-one really drinks alcoholic beverages for their nutrient content (do they?).

The bigger concern is really how much easier this makes it to abuse alcohol. The original Palcohol website actually advertised openly how Palcohol could be used to sneak alcohol into concerts, which of course is actually breaking the law. Then there’s the risk that teenagers will consider snorting powdered alcohol or even injecting it – both methods would make the user intoxicated much more quickly and could easily lead to lethal overdoses or serious accidents.

As with many technologies then, powdered alcohol is not itself unhealthy, but it could be very dangerous if abused. The question really is whether or not we can be trusted with the stuff…