Steady state cardio is the type of cardio you are probably used to. This is essentially any form of exercise that involves running for long distances, cycling on stationary bikes, or otherwise maintaining any type of aerobic activity for an extended period of time. If you exercise for an hour on one machine and you come off of it panting, then that’s steady state cardio.

And now the bad news. If you are doing this and your goal is to lose weight, then actually you are completely wasting your time. That’s right: steady state cardio is about the least efficient way to achieve body recomposition. But then you probably already knew this on some level. After all, how many people do you know who run for two-four hours a week and still look the exact same? 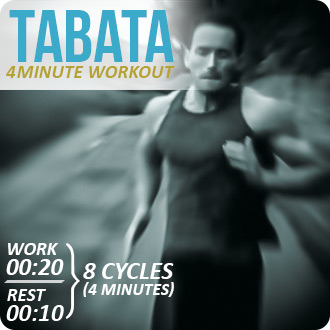 The far more effective alternative that you’re looking for then is something called HIIT – or High Intensity Interval Training. And one of the very most effective versions of HIIT is ‘tabata’…

HIIT stands for ‘High Intensity Interval Training’. This is a form of cardio where the objective is to go flat out for short bursts of activity, and then to follow this up with a period of relatively more gentle exercise.

For instance then, you might use HIIT on a treadmill by running at 70% of your max speed for about 2 minutes, then jogging lightly for 3. The split will vary depending on your level and your objectives, but the point is that periods of ‘active recovery’ allow you to put in more effort overall.

And put in more effort you shall. Not only does this sort of training increase your heart rate more than just jogging for the same amount of time, but it also increases VO2 max faster, burns more calories and stimulates a better hormone response. Part of this is due to the anaerobic nature of the quick bursts. That is to say that when you run at higher intensity, you’ll be going too fast to use fat stores for energy. This then means your body is forced to use up all the available blood sugar for energy, which then leaves you with no available blood sugar left afterwards. Subsequently your body will then release hormones to help mobilise fat stores and you’ll be forced to burn more fat for the entire rest of the day. HIIT recognises that it’s not really the number of calories burned in a session that counts, so much as the way your training alters your body and your metabolic rate even after you finish.

As mentioned, it’s largely up to you how you want to go about breaking up your intervals. But if you’re looking for the most intensive workout you can possibly get in a short amount of time… then tabata is probably what you need.

An entire tabata session takes literally just four minutes. Even in that very short amount of time though, you will find you burn more calories and change your metabolism far more than if you had trained for much longer. Many claim that three four minute tabata sessions is all you need to trigger major fat loss.

So what is this magic formula? Simple: tabata is eight 20 second sessions with intervals of 10 seconds between each one. So for 20 seconds you run like the wind, then for ten you recover. The only difference is that for each 20 second session you are going to put in 100% effort rather than 70%. That means sprinting rather than just running quickly.

Bear in mind that these tabata workouts are intense sessions that should be built up to and used sparingly. Doing tabata at full intensity more than a few times a week could potentially lead to adrenal fatigue and other issues associated with overtraining. Likewise, many people will be physically sick when attempting tabata for the first time: thus it’s a good idea to build up to it in a periodised program. This might mean that you start out with thirty second rests and only go to three minutes for example, and then over the course of a few weeks you can build up to more intensive sessions as you feel comfortable to do so.

Making the Most of Tabata

While tabata is always a furious workout and a great way to put your body in the coveted fat-burning zone, it’s nevertheless true that not all tabata workouts are born equal. In other words, there are things you can do to make more of these sessions and some mistakes will reduce their effectiveness.

The first tip then is not to use tabata with just running or cycling, but rather to use some form of resistance cardio, that is cardio that also provides your muscles with resistance. A good example of this might be doing lots of burpees in a row, or it might be to do lots of fast pull ups. Kettlebell swings are also popular.

What this will do is to create microtears and thus improve muscle tone while you train. Building some muscle is actually one of the very best ways to speed up weight loss, as your body will subsequently burn fat to maintain the muscle. If you have muscle tone, then you have a higher metabolism. (Not only that, but lower body fat will look much better with a little muscle tone to make your body look firmer.)

When doing these resistance cardio exercises, the next tip is to keep them varied. The more muscle groups you involve in your exercise, the more your body will respond by producing growth hormone and testosterone to trigger muscle repair and growth and to aid in weight loss. This also just makes the exercises a lot more fun, so instead of doing tabata with 8 sets of kettlebell swings, use kettlebell swings, fast chin ups, dips, battle ropes, tuck jumps, box jumps, burpees and press ups.

Another great benefit of using resistance work the basis for your tabata, is that it means you won’t be as likely to burn your muscle mass for energy. As such, a bodybuilder can then use this kind of training and not worry that they’re going to undo the work they’ve done lifting weights. This is why many bodybuilders will add tabata to the end of their routines as what are called ‘finishers’.

Whether tabata is used on its own or as part of a larger training program, it’s important that you don’t do more than three (or four at a push) sessions a week. The reason is that it is very taxing for the nervous system and if you use it too regularly you can end up fatiguing your adrenal systems resulting in overtraining and poor subsequent performance when exercising.

Used in moderation though, this can be an incredibly powerful tool for burning fat and getting a more ripped and toned body. And to help make your tabata workouts even more enjoyable and efficient, try searching ‘tabata songs’ on Spotify or on YouTube – you’ll find a bunch of four minute tracks with instructions for when to pause and when to go included!