Everyone wants to lose weight and build muscle and from time-to-time we all wish we could look a little more like the people plastered on billboards rather than the people who look back at us from the mirror. But despite wanting to look like uber men and women, few of us actually take the steps necessary to get there.

This is a strange contradiction that researchers and health advisors have struggled with for years, but the explanation is actually very simple: we can’t be bothered. Exercise isn’t fun unless you’re addicted, it takes up a lot of time and these days there are plenty of things that we would rather be doing. Thus, we often struggle to motivate ourselves to get up and start working out or to put on some running shoes and hit the tarmac, which results in our body shape not changing. 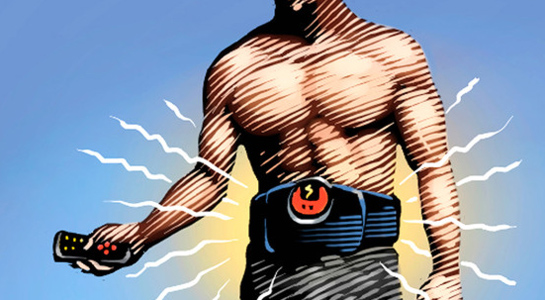 Would it be great if you could have your cake and eat it too? If you could lose weight passively while not engaging in any actual exercise?

Well, as you can imagine, we are not the first to have thought of this and there are actually several examples of devices and systems claiming to provide ‘passive exercise’. Let’s examine whether any of them actually deliver on that promise…

Vibration plates are vibrating platforms that claim to be able to help you burn calories while you’re sitting down resting. They do this by vibrating very quickly and thus creating ‘whole body vibrations’ to activate muscle fibers. The claim is in fact that ‘WBV’ can activate muscle fibers more effectively than conscious contraction… that’s a big claim. On top of this, it is also thought to increase bone strength, flexibility, weight loss and circulation.

So do they work? The answer is – as you might expect – not really. Otherwise, everyone would be using them (which will become a common theme in this article). For starters, we are currently lacking comprehensive research looking into whole body vibration. Moreover though, it’s important to recognize the way that it works and the way that muscle building works.

Essentially, the reason that muscle fibers fire when we’re on vibration plates, is because of something called ‘reflexive strength’. This is the strength that makes us suddenly tense when someone tries to steel our bag, and that helps us right ourselves when we go to fall over. In short, it’s our body trying to balance itself. While this might be legitimate firing then, it’s not quite the same as the kind of tension used to build muscle – just as you won’t get strong from curling your coffee cup. Muscle working does not automatically equal muscle growing. The only potential benefit here, is for the elderly in preventing muscular atrophy. Seeing as you are barely exerting yourself, you’re hardly going to lose weight this way either.

Bear in mind as well, that you still need to sit on a vibration plate for a lengthy period of time. You can’t really read or enjoy yourself during this time seeing as you’re shaking around all over the place… so it’s no ‘better’ than exercise in that respect. You may as well just run on a treadmill instead!

The next gadget claiming to provide ‘passive exercise’ is the ab belt. This is a belt that you strap around your stomach, which will then deliver short electric shocks in order to make you tense your muscles. This works because it causes your nerves – which signal each other with electrical impulses – to fire and thereby trigger a contraction that is unrecognizable to your body from the kind of contraction you might make doing a sit up. In theory, this could provide the same microtear in the muscle as a sit up too, which means it might be able to lead to the same kind of muscle development.

Unfortunately, the answer is once again: probably not. The reason for this, is that the contractions generally aren’t strong enough to cause microtears. The only way they would be strong enough, is if the shocks were turned up to the point where you almost doubled over when they fired – at which point you’d once again be better off just doing sit ups.

And anyway, getting visible abs is actually much more about burning fat around the stomach to reveal the muscle underneath than it is about strengthening the rectus abdominis.

Some stimulation is better than no stimulation though, so the only real benefit of this type of training is possible the prevention of muscle atrophy during recovery from an injury. Even then, it’s dubious.

Simply turning down the temperature can actually help you to burn calories as your body fights to warm you back up. This is especially true if you shiver. As an added bonus, being cold will also help you to produce more testosterone, strengthen your immune system and improve your circulation.

But if you thought that slight shivering would allow you to burn enough calories to see significant weight loss, then unfortunately you are going to be disappointed. While this is an effective way to burn extra calories and to increase your anabolism and metabolism, it’s nevertheless still only going to make a minor difference at best. To be honest, it’s probably not worth making yourself chilly (which can also cause stress – which is bad for weight loss) just for those few extra calories burned.

Non-Exercise Activity Thermogenesis, or NEAT, describes weight loss as caused by everyday activities such as climbing the stairs or running for the bus. In other words, there are tons of ways you burn extra calories throughout the day, and this is one of the big reasons that calorie counting doesn’t really work – we can calculate until we’re blue in the face, but working out how many calories we burned climbing the stairs, opening a can of beans or even typing at the computer is always going to be elusive (until technology progresses a little further at least).

NEAT is largely determined by your lifestyle. If you’re someone who works a very busy job, then you’ll find that you can get away with eating more and still remain relatively thin (though thin doesn’t always equate to healthy). Likewise, if you’re a stay-at-home Mum or Dad, then the amount of work you do around the house – and the effort you put in – will make a lot of difference.

Changing job then is perhaps one of the very best things you can do to effectively lose weight with no need for diet or training programs. Unfortunately though, it’s not always that simple to find a job that you’re still going to enjoy, that will take you on and that will pay a good salary.

Instead then, try looking for smaller ways that you can incorporate more activity into your usual routine. This might mean walking the first stop on your journey before getting on the bus, it might mean answering your e-mails at work standing up, or it might mean joining a sports class. It’s not passive in terms of physicality, but it’s passive in as much as you aren’t thinking about losing weight.

Another way you can burn calories, is bouncing your leg up and down under the table. If you do this compulsively, this is actually a condition known as ‘restless leg syndrome’ and it’s not a great habit seeing as it frustrates other people, makes you look nervous and potentially leads to other ‘ticks’ and behaviors. Nevertheless, it does technically burn calories in a passive – even unconscious – way. So consider that a silver lining! Again though, don’t rely on a little leg bouncing to create a full body transformation.

Dynamic tension and self-resistance are two methods of working out that have been devised to remove the need for actual equipment – or even all that much movement. Dynamic tension was invented by Charles Atlas and involves tensing your muscles while moving them through a particular range of motion. Self-resistance meanwhile, involves pulling against your own arm, or pushing your arms/legs together in order to create resistance with your own body. Bruce Lee even took this one step further with static contraction – pulling or pushing against a completely immovable force and maintaining the strain.

While there’s still effort and activity involved here, none of these forms of exercise require much movement or prep and all of them can be performed from the comfort of your office chair in theory. Unfortunately though, they also don’t work as effectively as lifting weights for building muscle because the amount of strain you’d have to produce would be tough on the joints and possibly burst a blood vessel. You’ll find that getting a ‘decent’ workout from these techniques is actually just as difficult as training with weights and nowhere near as effective.

Self-resistance biceps curls can be useful, but only really as a last resort while travelling, or perhaps as something extra to add to your training when you’re hanging around at a bus stop.

The squat position is the position that the human body is naturally designed to rest in – as opposed to sitting. The position we now spend the majority of our time in, is ironically one that’s very bad for our bodies causing an immediate drop in metabolism and causing all kinds of muscular imbalances and mobility issues.

Squatting on the other hand doesn’t cause a drop in metabolism. In fact, if you were to squat rather sitting while you worked at the computer, you would burn 70% more calories during that time than if you sat.