Resistance bands are a type of exercise equipment with many advantages. These are short rubbery bands that require a certain amount of force in order to stretch and which normally have handles attached to either end. This allows them to be looped around a pull up bar or a tree, or even under your own foot, so that you can then tug against them in order to perform bicep curls, rows, squats and all manner of other exercises. Because they’re so light, they can be easily stowed in a suitcase and taken with you on holiday. And because they’re so versatile, they can replace pretty much every piece of equipment you might normally use in the gym.

Who Are Resistance Bands For? 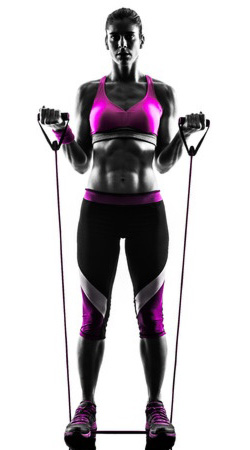 Resistance bands unfortunately have something of a bad reputation among those who are serious about exercise and strength training. They tend to come in a variety of bright, garish colours, and the place that most of us will remember seeing them is probably the circuits class or ‘boxercize’.

But don’t get it twisted: resistance bands can actually provide a lot of resistance if you buy the right kind – all the way up to 300lbs in some cases. And because they can be ‘doubled up’, you can make them even more challenging.

The Versatility of Resistance Bands

Resistance bands can also be used in combination with other types of training. A bodyweight exercise that is normally limited by gravity for instance can be made more difficult by looping resistance bands over your back. Likewise, you can even loop bands over a barbell in order to make a bench press more difficult (as long as you have an anchor point), or a squat. Because you can unhook them quickly, this is a great way to perform a more unique type of drop-set.

Another benefit of resistance bands is that they don’t stress the joints or your grip and you aren’t likely to drop them on your foot. This means that you can be much more daring and explosive with them and with the way you train, performing the kinds of movements you probably wouldn’t dare with heavy weights. They’re great for martial artists and boxers for instance as you can use them to add resistance to your punches while practicing, building up strength and explosive speed so that you’ll punch faster and harder when you don’t have the bands attached.

It also means they’re considerably safer for the elderly or the very youthful. If you have an injury, they’re great for that too.

Bear in mind that you can make a light resistance bands more difficult by changing the angle or the distance from the anchor point. Moving closer gradually is also a good way to slowly make the movements easier, thus allowing you to go past failure.

Good Resistance Bands vs Bad Ones

Good resistance bands should be made from tough materials that won’t snap, meaning that you can confidently lean against them and not worry about getting ‘pinged’ by a piece of rubber coming whipping back up at you.

Another convenient design that some resistance bands feature, is the ability to quickly switch out the bands that you have attached to the handles. This way you can replace a light resistance band with a heavier band, or you can quickly add multiple bands at once/remove them one at a time in order to perform a drop-set.

If you get resistance bands that are long enough, they can also be used for more creative training too: to provide resistance when doing things like crawls for instance.

Something that makes resistance bands relatively unique is that they are highly ‘directional’. That is to say, that once you set them up and decide on the exercise you are going to perform, you will then have to train through a very specific range of motion in order to maintain the resistance. If you’re doing an over-head tricep extension for instance, you’ll find that you can’t swing your arms or alter your posture much without changing the resistance. This means you have to maintain a very specific form throughout the movement, which in turn helps you to target specific muscle groups very precisely and encourages good form.

At the same time, this directional training means that you have force pulling against you the entire way through the movement. In the case of overhead pullovers and similar exercises for instance, you will have force pulling your upper body backwards. It’s then only by leaning/pushing against that force that you’re able to continue training the movement. In turn, this means that you’ll be getting great training for your core as well.

It’s also worth bearing in mind that the specific nature of the resistance is different with resistance bands – with the bands offering more resistance at certain points during the movement and less in others. As you get closer to the anchor point, the move becomes easier, and it becomes harder as you get further.

This can be considered a limitation, seeing as it means it’s hard to train evenly throughout the full range of motion. It also means that you’ll struggle to use bands that offer too much resistance, as you might find you struggle particularly at certain points during the movement (the end). In order to offer yourself enough resistance on the bench press for example, you would have to make the bands so tight as to likely limit the range of motion.

Despite being more hardcore than many people think, elastic bands are still not hardcore and still not truly suited to building massive muscle or strength.

The directional nature of the bands also could be considered a drawback. This makes it too easy for you to ‘cheat’ the movement for example, and it also means that truly compound movements (that involve the widest range of muscle groups) are difficult to perform.

Resistance bands then have been overlooked unfairly by many and are a much more capable training tool than most realise. They are versatile, easy to transport and they offer a unique challenge. That said, they certainly do have their limitations and won’t be enough for someone hoping to get a bodybuilder’s physique.

In short, resistance bands have their place and they’re ideal for anyone who’s on the move or as a way to mix up your training… but they’re not going to replace actual weights for most people.