At the 1993 Olympics, China’s team of female long-distance runners managed to smash international records. When asked what their ‘secret’ was, the coach admitted that they had help from a particular supplement called cordyceps sinensis. Prior to this explanation, accusations of PEDs had been thrown about…

If that wasn’t enough to get your attention, then it might also interest you to know that cordyceps is a fungus that actually grows on the backs of caterpillars. Thus, it is often referred to as ‘caterpillar fungus’. 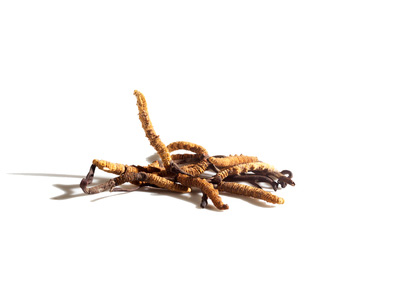 So, can the fungus from a caterpillar’s back really help you to smash long-distance records? What else can it potentially do for you?

As mentioned, cordyceps is a type of fungus (mushroom) that grows on caterpillars. Specifically, caterpillars found at high altitudes in the Himalayas and Tibetan plateau.

Of course, harvesting tiny mushrooms from the backs of bugs at extreme heights would be a fairly painstaking harvesting process, which is why it’s fortunate for manufacturers that it can now also be grow indoors.

The beneficial properties of cordyceps were reportedly first stumbled upon when farmers observed their animals eating the mushrooms and growing in strength as a result.

The health benefits of cordyceps are many. This mushroom contains 20+ bioactive ingredients and as is so often the case, serves as a powerful antioxidant. It is also believed to increase the production of ATP (adenosine triphosphate) which would provide the cells with more energy and thus enhance athletic performance.

But that’s not the only thing that cordyceps does for endurance athletes. The other magic property of cordyceps is its ability to open up the upper respiratory tract as a vasodilator. This allows us to take in more oxygen.

Many reports from users on forums and around the web do claim that cordyceps has a beneficial effect, allowing them to run longer and further without getting so out of breath – and allowing them to recover quickly after training sessions. Theoretically, a supplement like this could also aid with weight loss from such a training regime.

But does the evidence back up all the claims? Unfortunately, as is often the case, we have something of a mixed bag here.

On study for instance found that cordyceps worked on rats and could improve their aerobic health, helping them to activate more skeletal muscle metabolic regulators (1). Another study, published in 2010, found that elderly humans when given 333mg of cordyceps for 12 weeks, would show improvement in exercise performance (2).

On the flip side of this though, a 2004 study gave 22 trained cyclists cordyceps (315mg) and saw no improvement in aerobic capacity after 5 weeks.

So what can we conclude from this? Sadly… nothing. At this point, all we can safely state is that ‘cordyceps may work’. However, if you want to try something with similar benefits that is backed up by a lot more research and evidence, then you may want to consider beetroot juice!

There are many more health benefits of cordyceps and more reasons to add it to your diet (3). Cordyceps is firstly a very potent antioxidant that can help to protect your cells from oxidative damage, while also potentially helping improve longevity – in fact this is one of the key benefits of cordyceps!

Cordyceps has also been implicated in improving immune function, combating asthma and hepatitis B, fighting respiratory infections and improving cholesterol among other things. It is also a possible treatment for chronic fatigue syndrome and low energy.

With all this in mind, cordyceps is much more than just a supplement for runners. If you are interested in experimenting with supplementation for athletic performance, then give it a go and you may be pleasantly surprised. At the very least, it will be beneficial for your immune system and cells!