If you’re tired of running and looking for a more intense challenge, or have been playing too much Sonic the Hedgehog and Uncharted and just want a high paced adventure, then trail running might just be for you. 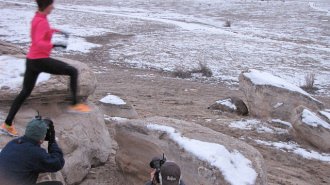 Trail running is of course a form of running, but is significantly different to road running or running on a track. Trail running is running turned up a notch and includes steep gradients, big jumps and drops and fantastic views, while being set in a variety of beautiful and exciting locations. Here we will look at what makes trail running so enjoyable and challenging and how to get started.

What Is Trail Running

Essentially trail running is a type of running that takes place not on the road, but instead on hiking trails throughout mountains and rural areas. Usually these are single tracks, but fire roads aren’t uncommon. Here the individual will have all of the steep inclines and narrow passageways that the hikers normally contend with, but will be required to pass through them much more quickly. At the same time trail runners will be likely to encounter the same varying terrain including hills, mountains, deserts, forests etc. In some cases they will need to use other skills as well such as scrambling and limited climbing. In some cases trail runs can ascend and descend thousands of feet across their trail.

There are many different variations and purposes for trail running. While some will use trail running as a way to simply get fit, others will spend weeks running across the terrain, or will take part in competitive trail running events. Trail running is of course particularly taxing and compared with regular running it will work a greater variety of muscles and in particular the supporting muscles in the feet and calves as they struggle to keep the ankles aligned and prevent twists and falls, and as they are forced to run against gradients – either up hills to down hills while slowing the descent.

Trail running can also benefit from some particular equipment and tools to help them cover the difficult terrains at high speeds. These include specially designed shoes with more textured soles and compound midsoles that are designed to protect the runners from injuries and punctures. Conversely however, because trail running takes place on the softer surfaces of dirt and grass rather than concrete, padding and cushioning is less important and the runners are less likely to suffer from shin splints or other leg problems. Lightweight crampons may be used to add traction on snow and ice.

There are many organized events and competitions which can help people to get started in trail running or provide a challenge for those who want to test themselves. Common distances include 5km races, 10km, 20km, 30km, 42km (marathons), 50km, 100km and more (everything over a marathon is considered an ‘ultra marathon’). One of the most challenging and toughest ultramarathons (‘ultras’) is the ‘Western States Endurance Run’ which is 100 miles long, and the UTMB in Europe which takes place along a 160K trail around Mont Blanc Mountain. It’s also possible to find trail running ‘series’ which take place over multiple races and use a cumulative score to decide the winner.